The thoroughly quantified self:

On the path to precision medicine, mice make great experimental subjects, in part because researchers can work with them in, well, very precise ways. They can measure everything about them, even monitoring them 24/7 in special cages. They can choose the variables between mice, or mouse populations, including genetics and environment. The biological insights gained provide the foundation for tailoring therapeutics to individuals.

But how do we translate that insight to humans? How can we be precise about our medicine when everything — genetics, environment, behavior — varies between each person all the time? How can we get our arms around the messiness of our own environments, behaviors and conditions so we can use data from our genomes to best effect?

Stanford University’s Michael Snyder, Ph.D., thinks he may have the answer. Snyder made waves several years ago when he took the “quantified self” concept to new frontiers, measuring close to as much about himself as possible at that time. Metabolism, blood chemistry, activity — hundreds and hundreds of data points a day tracked the minutiae of his life and yielded some interesting findings. Now he is widening the scope of the research.

Snyder’s lab is working with 100 healthy volunteers who agreed to provide even more measurements, including a deep dive into their genome sequences. They also gather data continually with wearables and smart phones, including activity and metabolism. In addition, Snyder and his team are looking at as many molecules as they can in blood and urine: the transcriptome (all messenger RNA), the proteome (all proteins), the metabolome (metabolic compounds and by-products), antibody profiles and so on. Finally, they’re monitoring the microbiome at five sites in and on the body.

The healthy volunteer measurements add up to what Snyder calls the iPOP, or individual personal ’omics profile. In all, the project will amass billions of measurements over time. The early returns are intriguing. So far almost 70 subjects have had their genomes thoroughly analyzed, and 11 had gene mutations or variants that merited an even closer look, a much higher frequency than anticipated. Most involve higher susceptibilities to cancer, heart disease, type 2 diabetes and other common, complex diseases, and have led to some changes in their medical care.

Also of note, the constant measurements add up to a baseline of normal function. Day by day people learn what is typical for them, which means deviations from the norm can be informative and, at times, important. For example, Snyder can tell who took a trip in a plane just by their blood oxygen levels, which dip during flights before recovering to normal after. He himself once flew to a conference and felt abnormally fatigued after. His oxygen remained very low and his heart rate elevated, so instead of chalking it up to bad jet lag, he went to a doctor and found he had Lyme disease. With constant measuring it was unmissable, but without the data he would have likely tried to soldier through, at least at first.

There are also related, but more focused research projects under way. In one, Snyder is collaborating with JAX Professor George Weinstock, Ph.D., to investigate type 2 diabetes. As in the iPOP project, they are gathering large amounts of host and microbiome data from 80 subjects, half of whom are pre-diabetic, for three years. The resulting physiology and ’omics data sets will be massive, and Weinstock and Snyder are hoping to tease out patterns that reveal when someone is about to become diabetic before they actually do.

It is a new frontier, but combining baseline biological data, such as our genome sequences, with real-time physiological data could create truly precision medicine. Knowing more about our susceptibilities from our biology is a good start. Establishing true physiological baselines makes possible the detection of even small perturbations in them, providing the ability to respond faster and more proactively. It’s not yet feasible to do this on a wide scale, of course, but the work provides an intriguing look at what may be our data rich medical future.

Micro RNA and the Importance of Basic Biology

It wasn’t that long ago that RNAs were regarded as rather static molecules. The information encoded in DNA is transcribed to messenger RNA (mRNA), which squeezes out of the nucleus to ribosomes in the cell, where proteins are made. Transfer RNAs (tRNA) in turn truck amino acids to the ribosomes in the correct order for protein production. These are crucial functions to be sure, but also straightforward. RNA was, to put it bluntly, kind of boring from a research standpoint.

How things have changed. As it turns out, there are many kinds of RNAs performing other vital, often complex functions in cells. And much of our understanding of one of the most intriguing forms — micro RNA (miRNA) — is thanks to the work of V. Narry Kim, Ph.D., who has made many significant contributions to the field since receiving her Ph.D. fewer than 20 years ago. Dr. Kim now directs the Center for RNA Research at the Institute for Basic Science, Seoul National University, and was presented with the Chen Award at the recent Human Genomics Meeting in Barcelona for her outstanding work. 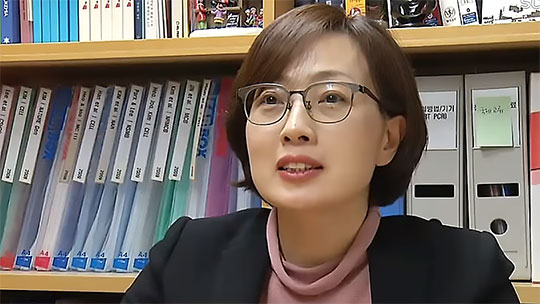 Over breakfast before the last day of the meeting, Kim discussed her interest in miRNA and the value of understanding biological details.

Q: First, what are miRNAs?

miRNAs are short [note: usually 21-25 nucleotides in length] RNAs that don’t code for proteins but are nonetheless highly conserved across species. They regulate many targets, such as in mRNA suppression, where they prevent an mRNA from being translated into a protein. miRNAs are in turn regulated by many other parts of the system. We know that they’re very important because they’re conserved, and also experimentally. For example, when we knock them out in mice, the mice get very weird, to be non-technical.

Q: What have you learned about miRNAs and what are you currently investigating?

Earlier we developed a model for how miRNAs are made in the cell and how that process is regulated. We’ve now expanded our program into multiple projects. In one, we’re looking at aspects of miRNA function in cells, such as how they help determine how stem cells differentiate into different mature cells and tissues. We’re also researching the structure of miRNAs, both alone and in complex with proteins, and determining how miRNAs are recognized and processed within cells. This project will help with miRNA gene annotation as well, as we can use knowledge of how they’re processed to improve database entries, many of which are currently inaccurate or incomplete. Finally, we’re studying different kinds of RNA modification and post-transcriptional control. RNA-protein interaction is important, and there are many different kinds of interactions, with many functions. We’re developing methods to map out the sites on the molecules that interact and determine the RNA sequences that are recognized by proteins.

Q: What systems do you use for your research?

We work in mammalian cells (human and mouse) mostly, but because miRNAs are so highly conserved, we use other animal models such as Drosophila and zebra fish to make comparisons and focus on what’s conserved between them.

Q: This is very detailed, basic work. Does it apply to humans and our health and diseases?

It’s true that we’re looking at fundamental biology at this time. But the mechanisms can be applied to any biological context: development, disease, cancer, degeneration. RNAs play many roles in many different processes in the cell, and you need to elucidate the basic rules that apply — you need to understand how it actually works — before you can know what happens when it goes wrong. That said, some of my students are interested in developing focused applications for RNA-based research after their work in my lab. So we’re building a foundation, but the knowledge we gain may be very useful for more translational or applied research in the years ahead.

Charles Lee, Ph.D., FACMG, began his term as president of the Human Genome Organisation (HUGO) at the annual Human Genome Meeting in early February in Barcelona, Spain. As genomic data pile up and clinical implementation of genomics becomes a reality, it is important to address many issues associated with genomics and precision medicine now rather than someday in the future. After a meeting packed with impressive science and compelling presentations, Dr. Lee contemplated HUGO’s place in the global research and clinical communities and its value moving forward.

Q: HUGO originally formed in 1988, and for almost three decades its focus has been on sequencing the human genome and providing international standards for genome research findings. Do you foresee changes as HUGO approaches its 30th year?

A: Yes, I do. Sequencing has become relatively commonplace and new capabilities are rapidly emerging. Genomics is entering the clinic, large genomic data sets are being compiled and used for analyses, genome editing is now widely accessible because of CRISPR, and more. As a result, we need to look at genomics through a broader societal lens, and I think HUGO, with its international scope, can play an important role in this.

For example, ELSI (ethical, legal, social implications) issues are critically important. An obvious one that is being discussed a lot is CRISPR and editing human DNA. What sorts of changes are permissible? What should be restricted? What regulatory oversight is appropriate? Even within a single country these are difficult questions, and with different cultures and traditions it is even more challenging to develop a coherent and effective framework for ethical research. With its international scope and members’ broad expertise, HUGO can be a powerful advocate and authoritative voice for broad-based recommendations in the efforts to establish this framework.

Another area of concern is the implementation of precision medicine. So far it’s largely concentrated in large medical centers and most patients who could benefit from it don’t have access. This is the case even within the United States, but when you look at the entire world, it’s apparent that more work needs to be done so that these impressive medical advances can be made available on a wider basis and not just to a select few.

Q: What research areas would you most like to see HUGO support?

A: I would like to expand our outreach and support to more regions around the globe. Supporting the growth of human genomics research internationally is a core piece of HUGO’s mission, and there’s far more to be done in this area.

It’s also of particular importance to expand the populations represented in genomic databases. Currently the data are mostly from populations of European origin, and acquiring large amounts of data from patients and healthy people in Africa, Asia, the Middle East and so on is becoming increasingly vital to correctly assess and annotate disease variants. We’ve seen several examples of a rare genetic variant being incorrectly correlated with disease in one population, only to find out later that it’s relatively common in healthy individuals from another population. Having better representation from a wide range of populations will increase the effectiveness and expand the value of clinical genomics worldwide.

Finally, related to this, HUGO can play a role in helping to bridge some of the data siloes that have already begun to emerge. By bringing genomics researchers together from all corners of the globe, we can help foster collaborative projects and build an environment to encourage data sharing and access. The sequencing of the first human genome was a huge achievement, but a single genome tells us relatively little about human genome diversity, which has long been my personal area of research interest. To get at the difficult questions regarding disease variants, complex disease and more, we need to gather many thousands or even millions of genomes for analysis. There are efforts underway to do just that, but it will certainly take more than a village to make it happen.

--Dr. Lee is an expert on structural variants in genomes and their roles in disease